5 Top Tourist Attractions in Hallstatt & along the Hallstätter See

Situated on the shores of the idyllic Hallstätter Sea, the tiny community of Hallstatt is perhaps the most beautiful example of the many quaint traditional villages waiting to be explored in Upper Austria.

Linked by road to the cities of Salzburg and Graz, Hallstatt’s beauty is matched by that of its lake, both of which are included in the Hallstatt-Dachstein/Salzkammergut Alpine UNESCO World Heritage Site.

The Hallstätter Sea – 8.5 kilometers long and up to two kilometers wide – has long drawn tourists for its excellent fishing and boating, as well as its stunning scenery. Between the town, the lake, and the surrounding mountains, visitors will find plenty of things to do in Hallstatt.

To learn more about why the area is one of the best places to visit in Austria for a vacation, be sure to read our list of the top attractions in Hallstatt and the Hallstätter See. 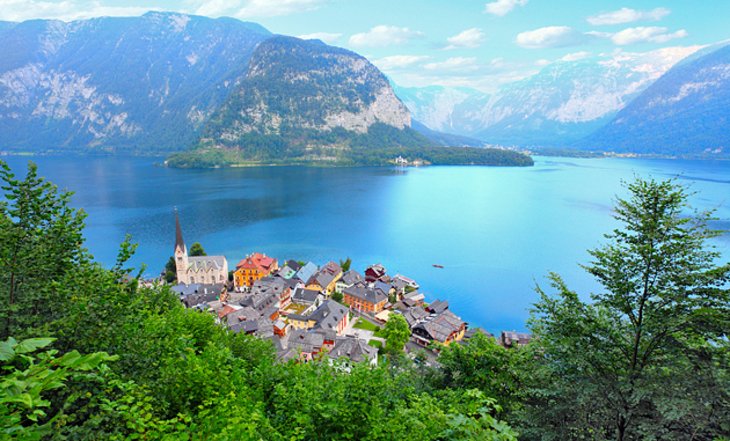 The Hallstätter See, a spectacular mountain lake in Austria’s Salzkammergut region, lies at the northern foot of the mighty Dachstein mountain range.

Some eight-and-a-half kilometers long and between one to two kilometers wide, the lake is up to 125 meters deep and is surrounded by steep, wooded slopes that give it a fjord-like character. Of the lovely villages that dot its shoreline, the most popular are Obertraun; Steeg; and Hallstatt, with its old church and market square.

The region has been deemed so important that it has been designated the UNESCO World Heritage region of Hallstatt Dachstein Salzkammergut. The Hallstätter See isn’t just stunningly beautiful, it’s also the most significant lake in the Alps in terms of history. And thanks to its many easily accessible beaches and stunning mountain scenery, it has also long been a draw for artists and outdoor enthusiasts, as well as those simply wanting some peace and quiet.

Popular activities include fishing, diving, and boating on traditional flat-bottomed boats. Or you can rent an electric or pedal boat to explore the lake (no motor boats are allowed).

The lake is also ringed by many excellent biking and hiking trails, some of which head up into the surrounding mountains. The region is also a habitat for a variety of diverse flora and fauna. These include many rare species, such as native orchids in the wetlands and moors in the south and north. 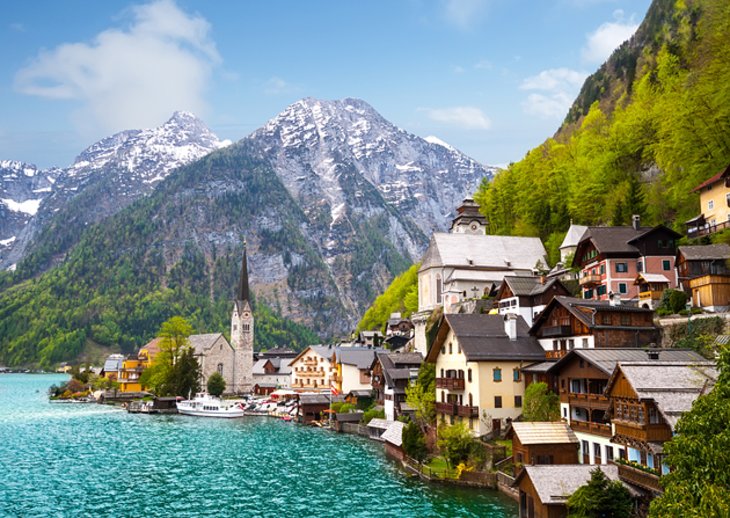 The little market village of Hallstatt, one of the most attractive places to visit in the Salzkammergut, is idyllically positioned on the southwest shore of the Hallstätter See.

Taking its name from the nearby salt mine, the village clusters around its charming Marktplatz, surrounded by traditional houses, their balconies draped in flowers. Shops and terraced cafés line the square, and a highlight is the elegant Holy Trinity statue.

One of the most famous views of the old village is from the popular Photo Point in the Römisches district, just a short walk away from Marktplatz. In the center of town is the 19th-century Evangelical Church of Hallstatt, its tall, slender spire a lakeside landmark. 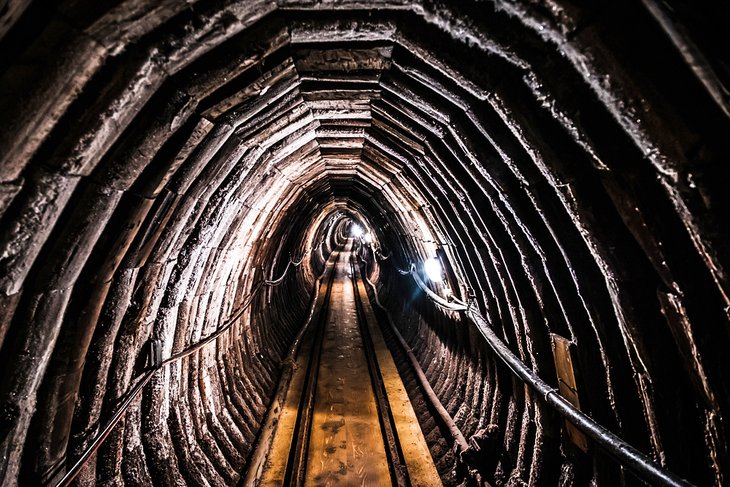 Really a number of excellent attractions in one, Hallstatt Salt Mine (Salzwelten Hallstatt) lies high above the town on the 1,030-meter-tall Salzburg (Salt Mountain). The star attraction, however, is the 7,000-year-old salt mine itself.

It’s accessible by cable car or a three-minute journey aboard the funicular railway. Highlights include the story of the preserved corpse found here in 1734, known as the “Man in Salt,” along with fascinating displays of ancient (and modern) mining methods. A new attraction here is the Salt Manufacture, which offers tours and a glimpse at how gourmet salt products are made.

Be sure to seize the opportunity to visit the Subterranean Salt Lake. Kids of all ages will want to whizz down the 64-meter-long Mega-slide, Europe’s longest wooden slide (all of it underground). 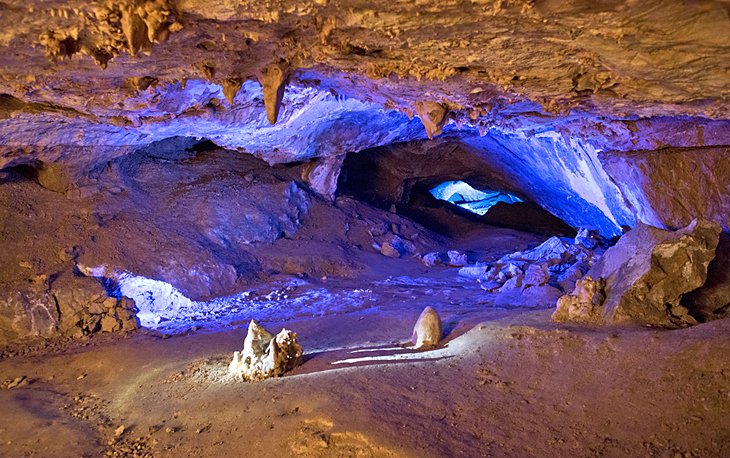 The mountains are also famous for the spectacular Dachstein Caves. This huge network of caverns is up to 1,174 meters deep and is among the most impressive in the Eastern Alps. It’s an underground world of ice sculptures, gigantic ice curtains, and huge icicles.

Highlights include the Dachstein Giant Ice Cave (Rieseneishöhle), with its many great caverns and magnificent frozen waterfalls. If you can, try to visit during one of its regular underground music concerts. Equally impressive, the Mammoth Cave (Mammuthöhle) consists of huge pipe-shaped galleries formed by an ancient underground river.

Before and after your 90-minute guided tour, learn more about the effects of climate change on this region at the exhibition, as well as see geological features on the Experience trail. Traveling with kids? They’ll not want to miss the adventure cave. 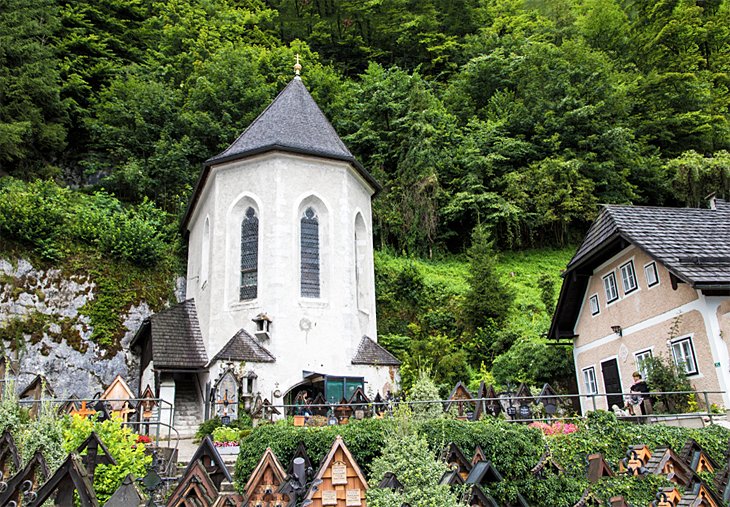 The 15th-century Roman Catholic Parish Church in Hallstatt – the Ascension of Our Lady Church (often erroneously called the Church of the Assumption) – is worth the short climb for several reasons, not least of which are the splendid views of the town and lake from its cemetery.

But the church itself contains some remarkable art, plus three fine winged altars and Late Gothic frescoes from around 1500.

If visiting as part of a tour, you’ll no doubt be told the fascinating story of an audacious art theft. In the 1980s, four Gothic paintings from the small altar of Mary were torn from their places and stolen. After years of searching, they were recovered and, in the spring of 2018, returned to their original places on the altar.

The most unusual feature here is in the 12th-century chapel of St. Michael. Here, the Charnel House (Karnel) is an ossuary displaying one of the largest and best collections of painted skulls known to exist. The practice of digging up remains when cemeteries ran out of space and storing them in ossuaries was not unusual, but the practice of painting them with flowers and identifying them with names and dates is limited mostly to Alpine regions. Few of these charnel houses have survived.